Mileage rollback: Put the odometer reading to the test

Buying a car is not an everyday occurrence and is usually an expensive affair. So, it's only logical that people start looking for bargains online. But how do you know if the offer is good? The odometer reading is an important indicator.

Unless you are a professional or have a lot of knowledge, the car-buying experience can be daunting. How are you supposed to know whether the vehicle listed lives up to the promises made by the seller? Well, first you should rely on your own gut feeling, the appearance of the car, but above all the mileage. This should match the age of the car. The kilometers driven say a lot about the condition and thus the value of a used car.

What is an odometer rollback?

In the past, rolling back an odometer meant manually reversing the numbers on the mechanical instrument that recorded the distance a vehicle drove. Odometers are now mainly digital, and these can be reset by altering the car’s circuit board and editing the mileage display to read whatever number you put in.

A vehicle with a mileage rollback represents an increased risk for the buyer which directly affects the residual value, price, functionality, durability of the vehicle and even the public road safety.

Is the odometer rollback legal?

In 25 European countries, mileage rollback is considered illegal. However, the penalties vary from a trivial offense to imprisonment. This opens the door to mileage fraud - especially because the used car market promises to be a lucrative business. The sales statistics prove just how lucrative. Take Germany, for example: according to Statista, just under 90 million euros were generated in the used car market in 2019 with mileage rollback.

In the first year of the pandemic, sales in the used car segment fell or stagnated, with some variations from market to market. "Sales volumes in the European Union were down 16.4% year-over-year due to COVID-19," according to the latest Indicata Market Watch for 2020. The trend continued in many markets in 2021. For example, in the Netherlands, the market dropped by about ten percent in January. Sweden actually grew in 2020, but at the beginning of 2021, the used car trade weakened. In Spain, it was at a standstill. Germany, an otherwise a growing market, faced a decline. If COVID-19 subsides, as it probably will, many will go in search of a vehicle. This is because the risk of contagion has made cars more attractive than public transport - even amongst younger target groups.

How to check for mileage rollback

Despite the criminal consequences, the current law does not deter scammers. This is indicated by the high number of manipulations that have been uncovered. In addition, the car trade is borderless within Europe, so jurisdiction changes quickly.

With this in mind, how can you check if the mileage is plausible? CARFAX has compiled some hints and checklists for you, which will help you to analyze the odometer reading: 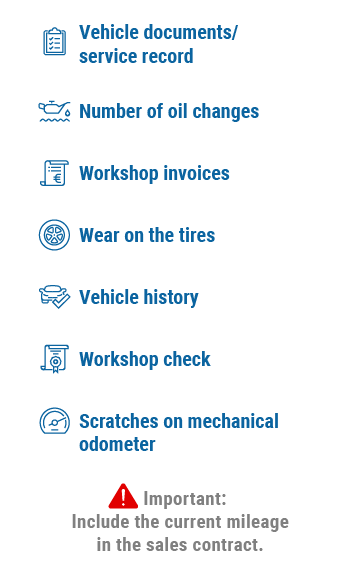 Get a CARFAX Vehicle History Report and compare the odometer reading(s) with the mileage provided by the seller and make sure the pattern is logical. The report is also helpful as it provides essential clues whether the information is correct. For example, the history of previous owners: the more the car has been owned and the older the vehicle is, the higher the mileage can be.

You should also compare the mileage on the speedometer with the car documents. Any inconsistencies with the numbers on official documents can indicate odometer fraud. The last service invoice, and potentially a log book (if available) or the workshop report can be useful for this.

When and how often an oil change was performed is also a good indication for a plausibility check. The owner’s manual of the car will tell you how often the oil should be changed. Example: There have been five oil changes. The manufacturer recommends an oil change every 20,000 kilometers. So, the odometer should show around 100,000 kilometers. The oil changes should be noted in the previously mentioned log book, recorded by the workshop or documented via workshop invoices. Another option is to look in the engine compartment for a sticker or tag of the last oil change. Workshops note the date and mileage on these when changing the lubricant.

Another tip is to take photocopies of the last workshop invoices. Ask the salesperson if you can get copies of the invoices. These show the mileage at the time of the service appointments.

💡 It can happen that the mileage is adjusted downwards before the service appointment. The manipulated odometer reading will then appear on the workshop invoice. This is why it’s important that you can request to see more than just the invoice.

If you want to be absolutely sure, have a trusted workshop check the readings and maintenance interval memory on the vehicle.

Wear and tear of the vehicle

The condition of the worn parts and the tires are also reliable indicators. If the car still has the original tires, and they are in good shape, that indicates low mileage. Also, look at the condition of the accelerator pedal, its wear and tear will indicate the amount of usage. Some older cars that are still registered have mechanical speedometers. If that's the case, check to see if there are any scratches on the speedometer. This could be a warning that the mileage has been "tampered with."

It is also important to include the exact mileage in the car purchase contract. It’s not enough to simply state “mileage as seen” or something similar. With exact documentation, possible claims can be better substantiated.

If you are still unsure after all this, have a used car check done by a garage or automobile club. This will cost you, but if you want to be sure, it's money well spent when you've invested several thousand euros in the car.

12% of odometers in the EU are manipulated

This tempts criminals to commit a shockingly high number of odometer manipulations. In an EU parliamentary debate, member of the Committee for Transport and Tourism, Ismail Ertug stated that, on the respective national markets, up to 12% of all used cars are manipulated. In cross-border trade, even between 30 and 50 percent, says the German MEP. This is why a uniform solution must be found.

The Belgians solve this with a certificate. They have introduced the "Car Pass" to combat fraud. In it, the workshop or the testing institutions must document in a database without any gaps what the odometer reading shows at the time of the inspection. "Since the introduction of the Car-Pass, the number of cases has dropped to almost zero within two years," says EU parliamentarian Pascal Arimont. The situation is similar in the Netherlands with the Nationale Auto Pas (NAP), the equivalent of the Belgian Autopass. In Sweden, since the introduction of CARFAX Vehicle History Report, mileage fraud has been reduced from about 10 to less than three percent, according to the company’s statistics.

A Europe-wide regulation is definitely needed to polish up the reputation of the used car market. A 2016 survey by the European Commission found that odometer fraud affects consumer confidence. The used car market is ranked by European Union citizens as one of the least trustworthy sectors.

A uniform solution such as open data would make it difficult for scammers. The principle of open data is already practiced in Germany by some municipalities, which make their data available to the public. In the Federal Republic of Germany, one in three used cars have a speedometer that has been manipulated, the German Automobile Association (ADAC) found last year. According to the automobile club, this results in damage amounting to six to seven million euros annually.

And this takes place despite the fact that the Federal Republic of Germany punishes changing the odometer reading with prison sentences and fines under § 22 b of the German Road Traffic Act (StVG).

Deceitful statements are just as unlawful, as a case before the Cologne Higher Regional Court shows. In this case, the seller had simply made a mistake in his offer on a trading platform and put 2,040 km instead of 204,032 km in the advertisement. The platform's algorithm promptly classified the vehicle as a "TOP offer". The buyer therefore filed a complaint. The seller was not even helped by the fact that the photo of the Golf clearly showed that it was an older model. He was ordered not only to cease and desist, but also to pay the court costs.

Salvage Title for US imported cars

Buying a car with an accident: How to check?

Used car check
Everything you need to know regarding how to check used cars, practically from a single source.
> Show all articles

Fraud
The used car market is prone to scams. Here's how you can protect yourself before buying a used car.
> Show all articles

Buying & selling used cars
Are you looking to buy or sell a used car? Find out what you should pay special attention to.
> Show all articles

Do you have any questions? Our support team will be happy to help you.