The offer on the US used car platform looks too good to be true. Despite transport costs, the purchase would be a real bargain. But after closely reading the ad, the term ‘salvage title’ pops up. That should set off your inner warning lights.

In the USA, the salvage title is an indication that the car has significant damage. If you are a technically skilled hobbyist, you could still turn the vehicle into a gem for little money. According to US used car appraiser Edmunds, prices for salvage title vehicles are up to 40% lower than current market prices.

However, before you dance for joy, you should find out exactly why the vehicle carries the salvage title. In most US states, salvage title is awarded to vehicles that have been involved in an accident and have suffered 75 to 90% damage. In Europe, that's called a total loss.

What a "Salvage" Title says

The reason for a salvage title doesn't always have to be an accident. In some states, cars are also marked salvage when they are no longer roadworthy due to weather disasters such as floods or hurricanes. Hail damage or vandalism can also be a reason for the entry.

💡 The specific reason for the salvage title is not uniformly required in the United States. Some states specify the reason, others do not. The naming also varies by state. It's sometimes referred to as "junk -title". In states such as Arizona, Florida, Georgia, Illinois, Maryland, Minnesota, New Jersey, New Mexico, New York, Oklahoma, and Oregon, a salvage title is issued when a vehicle has been reported stolen.

There is also the possibility that the car was stolen and recovered after some time. However, the insurance company has already settled the claim and therefore sells the vehicle.

Vehicles with salvage title have their own market. In the USA, they are bought by specialized salvage companies who restore them to their original condition. The former scrap cars then must pass a technical safety inspection before the title is cancelled. Among the buyers, however, there are also part recyclers who take the car apart and sell spare parts.

A broad playing field for scammers

Sometimes dubious companies are involved in this business. To remove the title from the documents, they simply register the vehicle in another US state. When the car is exported, it then has "clean" papers.

But it's not just the documents that are being manipulated. The vehicles themselves are pieced together on a large scale in a makeshift manner (sometimes with parts from a wide variety of automobiles). This happens mainly in Eastern European countries, and this is visible in CARFAX’s statistics. Since 2011, 2 million used cars were imported to Eastern Europe. Of these, 84.8% belonged to the category of vehicles with salvage title. Georgia seems to be the most popular state for these US imports in recent years. They are then visually spruced up and sold as "bargains" on car exchanges or via dealers in the direction of Western Europe.

While a large majority of cars are imported into countries like Georgia, Ukraine and Lithuania, it doesn’t mean that they stay there. In many cases, the vehicles are imported, repaired, and then sold into other European countries. Because of this practice, it’s especially important that you inform yourself about the vehicle’s history before buying a U.S. import car.

Most popular brands with a salvage title

Anyone who now thinks that the salvage vehicles imported into Europe are muscle cars is in for a surprise. Many German brands can be found on the import list from the States. Ranked number one and two by volume are Toyota and Ford, followed by BMW. Of the 291,787 used BMWs imported, 80.6% fell into the salvage category. The 4th and 5th top brands are occupied by models from Volkswagen and Mercedes-Benz. A shocking 86.7% of imported Audi's have the salvage title.

Here is a list of the top 10 popular brands imported to Europe, how many have a salvage title and what is the percentage of salvaged title from the total imported cars:

If buyers do not check the reason for the title in advance, they may experience the same as the customers of a car dealer in Kassel in 2019. The regional newspaper "HNA - Hessische Nassauische Allgemeine" reports that the public prosecutor's office investigated a car dealer owner and his son. The clients decided the cars "were only at first glance accident-free used cars" imported from the USA. Those who entered the chassis number (VIN) online found out the cars had been totaled. The cars were then, experts assume, reconditioned in Eastern Europe before the Kassel dealer put them on the market (or put them up for sale). The dealers would collect a non-refundable down payment from the buyer. In the contract, they would appear as mediator and not as salesman, to avoid legal responsibility. The aggrieved parties could have avoided this hassle.

Reduce the risk of buying a salvaged used car: Get the CARFAX!

To avoid hidden problems, it's always recommended checking the CARFAX Vehicle History Report first. Concealing the salvage title, in any form, constitutes fraud. This is why the titles are recorded in documentation throughout the US.

Our Vehicle History Reports contain over 32 billion historical records from 20 European countries, the US and Canada, which are updated daily with new information. Whenever looking to buy a used car, always check to see if the car has a record of:

Save thousands and drive safe. Don't buy a car with hidden damages.

When a salvage vehicle is a good deal

It's important to note that buying a car with this title doesn't have to be inherently bad. If you have a limited budget and the technical know-how, the salvage vehicle may be a favorable option.

Since flying to the States for an appraisal is usually not worth it, the car should be appraised by a neutral party beforehand. He or she can judge whether the vehicle is worth purchase or if it should make one more trip - to the junkyard.

The expert can then make an estimate of what the repair would cost. It's possible the reason for the "salvage" vehicle will come to light during this process.

Like the car, the dealer should also stand up to scrutiny. Research on Google or reviews on social media from previous customers can be very helpful.

However, this may not be necessary if you have previously requested the CARFAX used car history and thus know whether the vehicle delivers what it says in the ad.

Everything you need to know about buying a used car 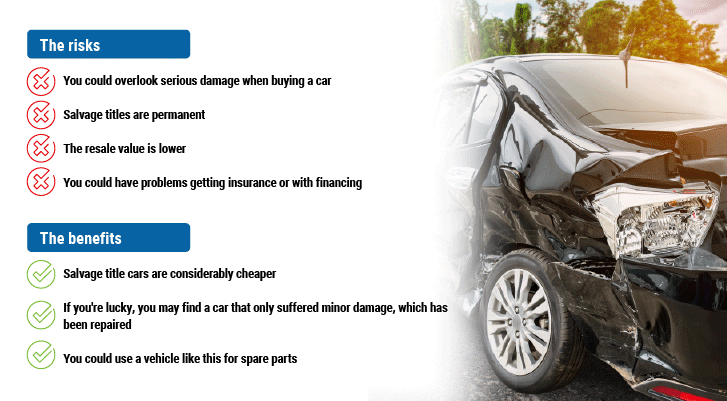 My car is smoking – reasons depending on the smoke color

Do you have any questions? Our support team will be happy to help you.